Driving north from Newport towards Risca on the A467 along the banks of the River Ebbw you cannot fail to notice the new RF Brookes ready meals factory. Its smoothly curved roofline and sleek, silver cladding suggest a quiet confidence in a quality product.

The factory, built by Bovis Europe at Rogerstone Park, covers 20,000 square metres. It provides sufficient capacity to relocate RF Brookes’ existing local facility from The Wern and will more than double the existing production capacity. This will provide a springboard for growth of their business with key brand name clients such as Marks & Spencer, Pizza Hut and Whitbread. The site will produce chilled and frozen meals for distribution throughout the United Kingdom and across Europe.

The land, formerly the Pontyminster farm and hence a genuine “green field site”, was occupied early in 1998 for preliminary groundworks and a major construction project in the heart of a scenic Welsh valley, the project was subject to close scrutiny by the Welsh office and the Department of the Environment. Strict codes of practice relating to airborne, ground, water and noise pollution were laid down by RF Brookes and policed by Bovis. Design and construction work progressed rapidly, and the first services installations commenced early in November. The programme was driven by the need to meet key production dates in the third quarter of 1999, but the development of the RF Brookes business throughout the project meant that the design had to remain flexible for as long as possible.

This required close contact between the RF Brookes team, the design team (architect, structural engineer and services consultant) and the squad of specialist sub-contractors who turned the plans into reality. This high degree of co-operation was achieved by Bovis through a management contract (JCT87) which brought the various groups together in regular services co-ordination meetings, and allowed frequent shifts in requirements to be incorporated into the scheme.

Room temperatures are monitored throughout the factory to provide full traceability, and linked through the Allen-Bradley control system to a Rockwell RSView 32 control and data acquisition package. Control of the process environment and refrigeration systems is also achieved with Allen-Bradley plcs, with four separate plc racks in roof void control panels.

The control software was designed on a modular basis to assist with initial commissioning and ongoing maintenance, but with over two hundred separate rooms to control there are many variations on each theme. All of the plant control is linked to the RSView 32 system allowing the site services engineer to check on the operation of process equipment, air handling systems and cooling plant from computers around the site. In the event of an alarm an auto-dial facility links to Star Refrigeration’s Bristol office to call out a standby engineer on 24-hour cover.

Star provided a full Project Management, Design, Construction and Commissioning service for the factory’s refrigeration systems, air handling, heating, ventilation, extraction and office air-conditioning. All areas of the factory are climatically controlled to temperatures ranging from 3ºC to 18ºC and relative room air pressures are used to segregate low risk and high risk areas. With growing concern about the environmental effect of industrial installations, RF Brookes chose ammonia as the primary refrigerant. This gives high efficiency freezing at low temperatures and has no direct effect on ozone depletion or global warming. The secondary refrigerant used for chill areas and air handling units is a non-toxic, food-safe potassium salt solution.

The main refrigeration plant comprises nine Howden ammonia screw compressors with ammonia pumped to the factory at –40ºC and –15ºC, and potassium brine at –7ºC and 0ºC. Star’s design for the compressor network optimised the flexibility of the plant, with compressors able to transfer from one cooling duty to another in order to keep the available capacity in balance with the load requirement.

The services plant, including refrigeration, boilers, electrical distribution, sprinkler water storage tanks and maintenance workshop, is housed in a separate Energy Centre adjacent to the factory. The factory equipment includes five Frigoscandia Gyro freezers, four blast chillers, an 18,000m3 cold store and a 40,000m3 dispatch chill, as well as numerous smaller production rooms controlled at a variety of temperature and humidity levels. At the peak of the installation effort, Star had up to seventy five subcontract welders, pipefitters, insulators and electricians on site in addition to their own engineers.

With a five-strong project team permanently on site, supported by a team of six designers at their head office in Glasgow, Star took on the task of co-ordinating all services in the roof void, including sprinklers, steam and water pipes, electrical services as well as their own primary and secondary refrigerant pipes, drains and air ductwork. This produced an integrated services installation with maximum flexibility and a minimum of unnecessary complication.

In keeping with such an impressive facility the adjacent office building is well equipped to accommodate all the necessary support activities, including a test kitchen for new products, a restaurant and a 400 seat lecture theatre. The office air conditioning uses Mitsubishi splits with ozone-friendly R407C as the refrigerant.

Four outdoor condensing units serve a total of fifty two fan-coil units which can provide heating or cooling to each zone within the office block.

Despite the usual hurdles found on all major construction projects, Star Refrigeration’s team was able to start commissioning the refrigeration system in June 1999 as required. Process fit-out then started in earnest and the site is now well on its way to full production. The contract, for just under £7.5m, was the largest in Star’s thirty year history. It has provided a wealth of knowledge to an already experienced team. 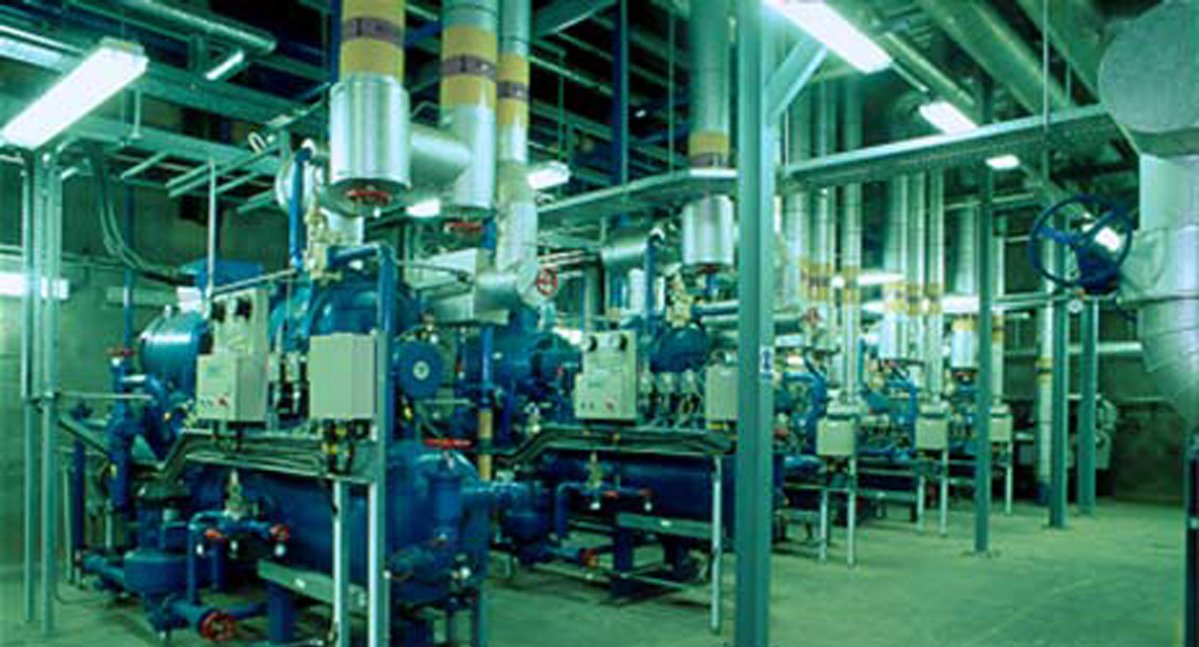