Star Refrigeration has helped one of the UK’s top food manufacturers, Blakemans to reduce environmental impact and cut energy costs, by transitioning to a high efficiency, natural low charge ammonia Azanefreezer 2.0. In line with their environmental policy, the company appointed Star to aid in their commitment to reduce their Carbon Intensity by at least 55% by 2025.

The plant has now been fully operational for a year and readings from the site indicate that the energy usage is around 35kWh/m3 per year – a 77.3% reduction in energy consumption when compared to Blakeman’s old system. This is equivalent to just 961.215kg of CO2 per day.

The existing cooling system comprised six separate plants operating on synthetic refrigerant R404A, which is now being phased out under F-Gas Regulations. The ageing system was proving unreliable, inefficient and costly to maintain.

It was vital that the two cold stores remained fully operational throughout the Blakemans project, with no loss of cooling. Additionally, the challenge of space limitations within the existing plantroom dictated the need for a compact cooling solution that could be sited externally.

Star designed and manufactured a state-of-the-art low charge ammonia freezer, the Azanefreezer 2.0. This packaged ammonia plant is a future-proof, natural refrigeration system with proven technology to provide efficient eco-friendly cooling for over 20 years.

Azanefreezer 2.0 also makes a significant contribution towards reducing Blakemans environmental impact on two levels. Firstly, ammonia is a fluid that has no direct effect on global warming and choosing ammonia safeguards against future legislative requirements relating to the phase down of global warming refrigerant gases. Secondly, the inherent efficiency of ammonia plants means there are lower indirect emissions resulting from the energy consumed when the plant is running. Data from recent installations has demonstrated Azanefreezer can reduce the annual refrigeration energy consumption of a facility by between 30% to 50% when compared to sites with a similar volume using traditional pumped recirculation ammonia systems or systems using synthetic refrigerants.

The pre-packaged air-cooled system is located on the roof of the existing cold store refrigeration plant room at Blakemans, with all valves positioned externally to eliminate risk associated with leakage.

The Blakemans project was completed following a carefully phased 15-week installation programme which required the temporary relocation of the existing coldstore condensers to make space for the low charge ammonia freezer. Star’s expert engineering team carried out decommissioning and disposal of all existing equipment, whilst maintaining temperature continuity and ensuring 24/7 operation in both cold stores.

The bespoke Star-built Azanefreezer 2.0 is designed to maximise efficiency and minimize refrigerant charge.. It features twin, economised screw compressors, an air-cooled condenser with EC fans, Star’s low pressure receiver and four evaporators, each with reverse cycle defrost. The system design overcomes the need for the large ammonia volumes associated with pumped recirculation systems, reducing charge by around 80% and improving safety.

Blakemans’ Azanefreezer 2.0 has a 290kW cooling capacity and provides cooling to maintain a temperature of -22°C in both chambers. The two coldstores are used for storage of frozen packaged meat products and raw ingredients.

Star Refrigeration Regional Sales Manager Sean Hurley says: “The key requirement was to provide Blakemans with a highly efficient and future-proof natural refrigerant solution that would allow Blakemans to transition away from a less efficient and expensive to service HFC type plant. Azanefreezer 2.0 runs on a low charge of natural ammonia and is designed to deliver reliable and cost effective cooling performance for in excess of 20 years.”

Azanefreezer 2.0 is a pre-packaged ‘plug and play’ refrigeration plant manufactured in the UK by Star and with a life expectancy of 20+ years. To ensure plant efficiency is maintained during the systems life, the package has a PLC control system with remote access capabilities for off-site monitoring and connection to our award winner Ethos performance management system.

Phil Blakeman, Managing Director at Blakemans said “In March 2020, we made an important investment to switch our cold store refrigeration system from an R404a plant to an Azanefreezer unit. The previous system accounted for around 24% of our annual Electricity consumption in 2018. Comparatively, the Azanefreezer unit is much more energy efficient, consequentially having lower electricity consumption and lower CO2e emissions. Being one of our biggest energy uses on site, we expect to see significant savings on our CO2e emissions for years to come”.

“We have taken a big step in reducing the volume of environmentally detrimental substances on site. On top of this, we are currently working with Star on the next stage of our site refrigeration upgrade.”

In addition to choosing the Azanefreezer 2.0, Blakemans commissioned Star Data Analytics, Star’s strategic insight data services team, to monitor the impact on the climate by looking at their energy use. Having set themselves some stiff target to reduce their Carbon Intensity and in keeping with their focus on sustainability, the company took the option to include Ethos on their new AzaneFreezer 2.0. Ethos has proven to be a useful addition by providing them with energy usage transparency.

Ethos collects relevant data from the refrigeration plant by communicating directly with the Star PLC. Ethos analysis software then applies the live site data to a ‘dynamic digital twin’ of the cooling plant to measure the gap between the ideal and the actual operating conditions. The data is displayed on a dashboard which contains lots of useful information for plant operators and owners.

Measuring and monitoring relevant parameters at Blakemans new plant has provided a baseline for benchmarking performance and immediately informs them as well as the Star’s maintenance team if the plant drifts from the optimised conditions. As with all complex industrial systems, mechanical faults might occur and Ethos ensures that customers are protected should the unthinkable happen. Recently, Blakemans and Star were alerted to an issue that was affecting the plant’s energy performance. By taking early action they avoided costs that were estimated to be around £2,000 /month.

By combining the AzaneFreezer 2.0 and remote performance optimisation service Ethos, Blakemans has ensured that they never waste a penny by finding clever technologies to reduce energy consumption and CO2 emissions.

Azanefreezer 2.0 is designed for cold storage and food manufacturing applications, including blast and spiral freezing. Modular models range from 111kW to 650kW and are designed for low temperatures between -18°C to -40°C. Azanefreezer’s control panel is ‘Ethos’ ready, enabling customers to activate Star’s award-winning software for ongoing monitoring of plant performance and optimum efficiency. 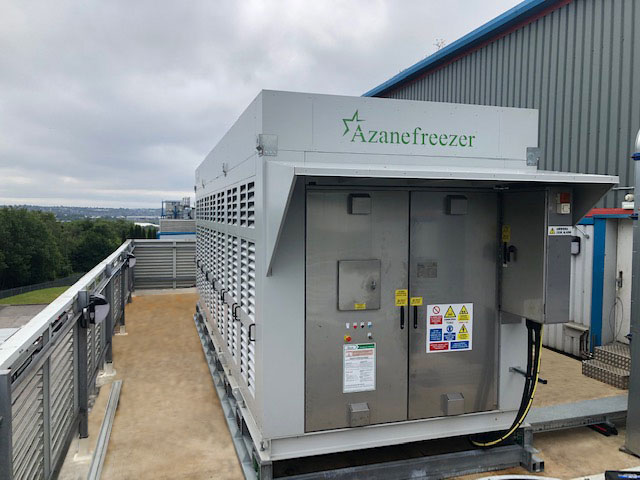