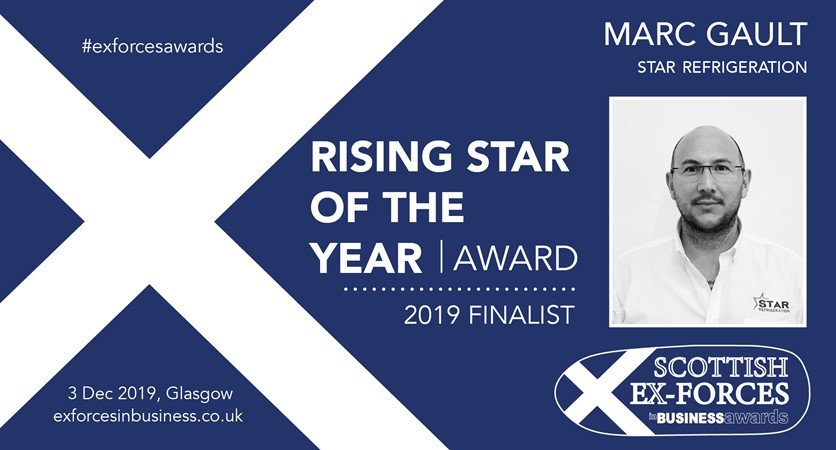 “I completed my fast track training pathway in just under a year. A year later I was given the opportunity to become the Branch Contracts Manager. It has been a steep learning curve with many challenges but it is extremely rewarding. There is always someone happy to lend a hand and offer their advice."

Marc Gault decided to transition from the military back to civilian life after serving in many operational tours. He was keen to continue down an engineering career path and had some exposure to refrigeration during his time in the Army. After some research, he reached out to Star and was enrolled into the fast track training programme he completed in under a year.

I enlisted into the 1st Battalion The Argyll and Sutherland Highlanders in August 1999, where I served in Northern Ireland and Edinburgh Castle. I transferred to the Royal Electrical and Mechanical Engineers in 2007, stationed in Germany, California and Canada.  I also served in many operational tours including Afghanistan and Iraq.

I had spent most of my adult life away from home and thought it was time for a change and a new challenge while I was still relatively young. During my last posting in the army I decided it was the perfect time to transition into a new career away from the military. Once the decision was made, it was all go. I  have never looked back and enjoy every minute of it.

Being an engineer in the army is very different to what you are doing now with Star Refrigeration – how did this career move come about?

I always wanted to remain in an engineering role. When I left the forces I was an engineering manager and I was keen to continue in that vein, although in a different trade. Refrigeration has a funny way of getting you hooked. It is fast paced and no two days are the same, which is the way I like it.

Had you always shown an interest in refrigeration?

I had some exposure to refrigeration whilst in the army, mainly on vehicles and refrigerated containers. I came across Star Refrigeration’s website and following a chat with Dave Bartlett (Operations Training Manager) I decided it was for me. It was more the company than the actual job that attracted me into the industry. I immediately felt at home with Star and was made to feel very welcome from the outset.

“It was more the company than the actual job that attracted me into the industry. I immediately felt at home with Star and was made to feel very welcome from the outset.”

What skills were you able to carry over from your role in the army to your career with Star Refrigeration?

I had lots of mechanical and electrical experience on a variety of equipment which helped me during the fast track training pathway. In my current role, there is a lot of time and resource pressure, something which the army definitely prepared me for, not that I knew it at the time!

What were the biggest changes you noticed when you moved from the army to StarRefrigeration?

Star and the army share similar values and standards, so the transition to civilian life was relatively easy for me. At the time of leaving, I was regarded an SME on many platforms and initially found it difficult being the new guy, having to start at the beginning again. The fast track training programme is aimed at engineers from other industries and got me up to speed quickly. Star has so many experienced colleagues who are more than willing to give you as much of their time as needed.

You started off as a trainee engineer at Star but you are now the Regional Branch Contracts  Manager, so you have progressed quite a bit! How long did it take you to move onwards and upwards at Star?

I completed my fast track training pathway in just under a year. A year later I was given the opportunity to become the branch contracts manager. It has been a steep learning curve with many challenges but it is extremely rewarding. There is always someone happy to lend a hand and offer their advice.

What advice would you give to anyone who is switching from a career in the army to one in a completely different industry such as refrigeration?

Keep an open mind. Many of the skills and experiences gained whilst serving are transferrable. Soldiers are very adaptable and fast learners, they show initiative and humility, often in adverse conditions. Be open to new opportunities and don’t pigeonhole yourself too early.

Give yourself plenty of time and have a plan of what you want to do when you leave. It may not work out so have a backup plan. Make use of your learning credits wisely, picking subjects that will enhance your CV and general knowledge. Don’t just fire out a generic CV and covering letter, tailor them to suit the company and role you are applying for, and do your research!