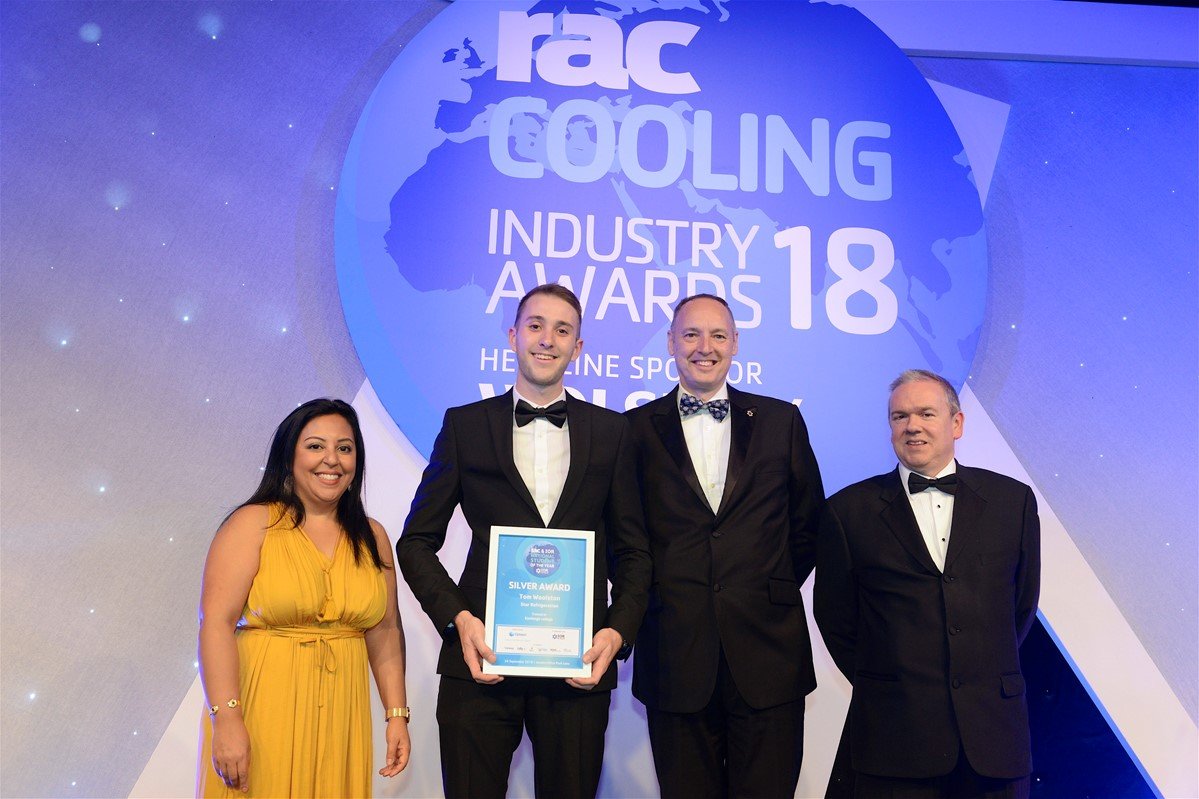 Star Refrigeration Operations Group apprentice, Tom Woolston, has won the silver prize in the Student of the Year category at this year’s RAC Cooling Awards. The ceremony took place last night at the London Hilton on Park Lane, where Tom and nine of his fellow apprentices from across the UK had their dedication, hard work and engineering expertise recognised in front of 600 industry professionals.

After receiving the award, Tom said, “It’s such an honour to be given this award in front of so many industry professionals. I feel incredibly privileged to have even been nominated in the first place, so to reach the final ten and then to win the silver award tonight is a dream come true.”

“I couldn’t have done it without the help of my friends and colleagues at Star, so I’d just like to thank the whole team for making it such a great place to work.”

In recognition of their achievements, Tom and the other nine finalists will all receive a year’s membership to the Institute of Refrigeration’s Service Engineers Section. For finishing second, Tom also walked off with a cash prize.

James Ward, Operation’s Director at Star Refrigeration said, “I’m delighted for Tom, who deserves this award for all the hard work he’s put into his studies and his apprenticeship over the last three years. He’s a credit to Star and I’m certain he has a great future ahead of him in the refrigeration industry.

“Indeed, all of the ten finalists deserve a massive pat on the back for doing themselves proud tonight. It’s a huge testament to the talent coming through and the next generation of engineers that the competition was so strong this evening. I wish them all the best for the future.”

It’s not the first time that a Star apprentice has had their efforts recognised in award form. In 2014, Oxford-based apprentice Lyell Perks claimed the top prize at the same awards evening in the Student of the Year category. More recently, Sam Gills from Star’s Washington branch near Newcastle won the 2017 ACR Trainee of the Year award and has since made it to the final six in the WorldSkills engineering competition, set to take place this November.

Star’s history of apprentices winning awards is a reflection of the company’s desire to nurturing the next generation of talented engineers. ‘Developing Young People’ is one of Star’s core values and the company not only sponsored the Student of the Year award at last night’s ceremony, but also sponsored the Effort and Progress award at the IPS Engineering Apprentice awards last year.

Star will continue its ethos of promoting the training and education of promising young engineers to ensure a bright future for the refrigeration industry across all of its sectors.