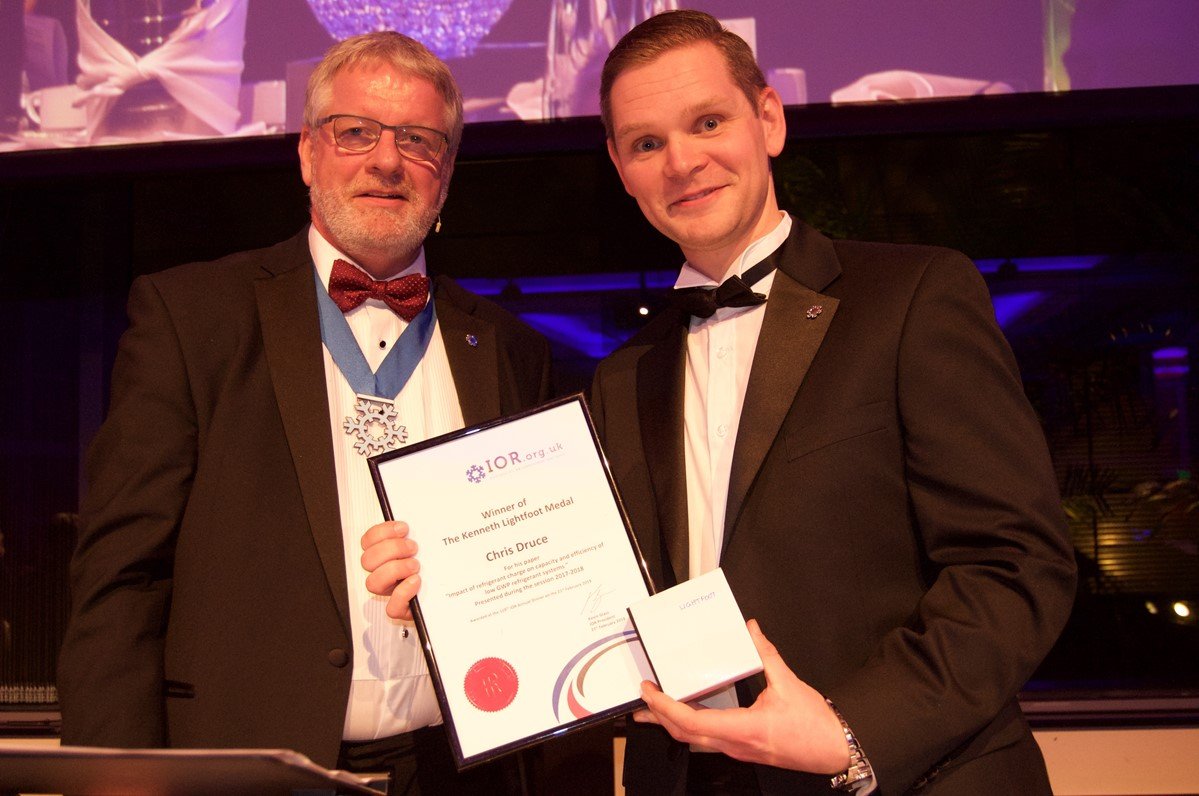 Chris Druce, who began his career as an apprentice at Star, was presented with the prestigious award on 21st February 2019

The Kenneth Lightfoot Medal, an annual prize awarded by the Institute of Refrigeration for the best research paper of the past twelve months, has been given to Star’s Oxford branch Service Manager Chris Druce. His paper entitled ‘The Impact of Refrigerant Charge on the Capacity and Efficiency of a System Containing Low GWP Refrigerants’ impressed the IOR membership and he was awarded an engraved medal and a £500 cash prize donated by Lightfoot Defence.

Chris first joined Star as an industrial refrigeration apprentice over a decade ago, and has progressed rapidly through his career trajectory. This is not Chris’ first recognition from the Institute of Refrigeration; he also picked up the IOR’s Ted Perry award for his student research while completing his degree with Star.

The award was presented at the IOR Annual Dinner, and Chris also led a networking event to encourage engineers to share ideas and get more involved in the industry. Kevin Glass, President of the IOR presented him with the award and remarked, “This paper explores a topic that is very current, the importance of correct refrigerant charge, and the results are relevant to a huge number of refrigeration systems. Chris provided an interesting and balanced investigation into system life cycle operation and environmental impact.”

The research topics of Star’s engineers are often centred on efficiency and sustainability, in particular the use of low GWP refrigerants. In his paper, Chris notes that the refrigeration and air conditioning industry costs the UK an estimated £2,500 million annually in energy bills, with cooling systems estimated to lose 20% of refrigerant charge each year. This has a direct impact on energy consumption, carbon emissions and service costs. The paper investigates the operational cost of refrigerant charge, comparing different refrigerants and associated carbon emissions.

This is not the first time the Kenneth Lightfoot Medal has been awarded to a Star Refrigeration employee. In fact, the previous award winners for the past four years work for Star; Dr Rob Lamb’s paper ‘Refrigerant choices for small scale industrial refrigeration’ won the 2016/17 prize, the 2015/16 award was jointly won by Dr Andy Pearson and Maurice Young for their paper entitled ‘Ammonia leakage, dispersion and risk assessment’ and the 2014/15 prize was won by John Clark and Angus Gillies for their research on ‘Comparison of evaporative and air cooled condensers in industrial applications’.

Dr Rob Lamb, Group Sales and Marketing Director said, “As we celebrate National Apprenticeship Week and all that we offer on our first class apprenticeship scheme, it is very fitting that a team member who joined the company as an apprentice himself wins this award industry award. Chris has worked his way up from apprentice to refrigeration engineer to manager, and now has industry wide recognition – this is a success story for all apprentices to aspire to.”

Star is proud to be a company which promotes progression, with 23% of the current management team starting their engineering career as an apprentice. The four-year apprenticeship is one of the most comprehensive offered by the engineering sector, with 99% of Star apprentices offered a permanent position on completing their training.

For more information about the Institute of Refrigeration’s Kenneth Lightfoot Medal visit: https://www.ior.org.uk/about/IOR-awards/kenneth-lightfoot-medal

To find out more about Star Refrigeration’s engineering apprentice scheme go to: /apprenticeships.aspx

To find out more about his story and how he became an award winner go to: /apprenticeships/chris-druce.aspx