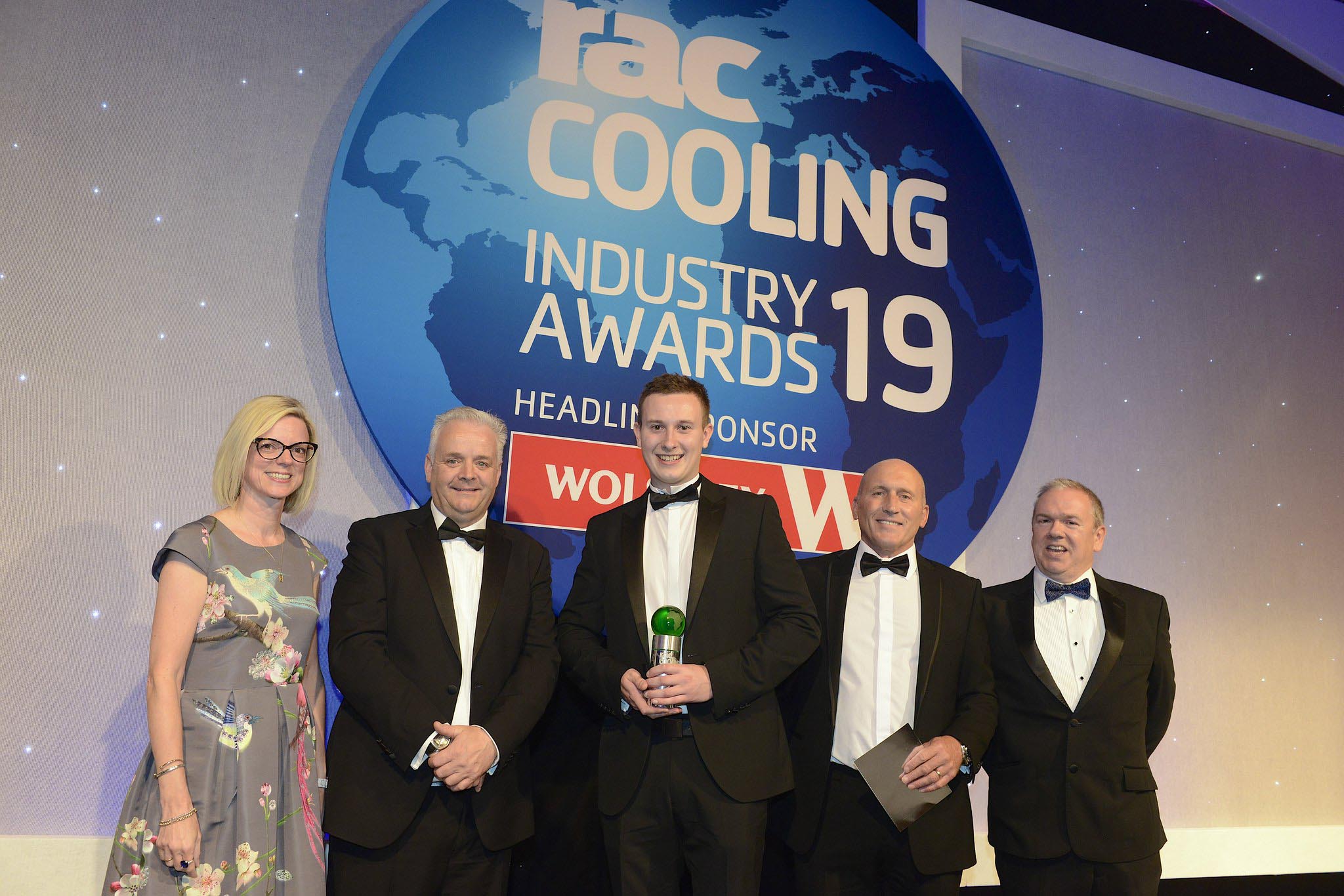 Fourth year apprentice at Star Refrigeration’s Newcastle branch, Sam Gills, has been awarded Student of the Year 2019 at the RAC Cooling Awards. The talented trainee engineer was named the Gold Prize winner at a formal awards dinner at The London Hilton on Park Lane on 25th September.

He was followed by Ryan Walton of AC Solutions Group for the Silver Award and Adam Walker of J & E Hall for the Bronze Award.

Taken aback by the announcement, Mr Gills said, “I didn’t think it was my night as I’ve already been awarded two industry prizes as a student – a third is a dream come true as I come to the end of my apprenticeship. I have really enjoyed my journey on Star’s apprenticeship scheme and I’m now looking forward to embarking on my engineering career.”

The triumph comes at a very exciting time for the company which is experiencing unparalleled growth. Over the past year Star has launched new CO2 and ammonia packaged chillers and rolled out the pioneering Ethos energy management software at various sites and commissioned heat pumps in Glasgow and London to start to decarbonise the UK’s heating network. With all these developments in the pipeline, Star’s commitment to ‘Developing Young People’ is even more important to maintain its position as an industry leader.

The company places a heavy focus on top class training and offers an apprenticeship scheme for budding engineers offering the majority of students a full time job on graduating. Some of the latest beneficiaries of Star’s commitment to the next generation include Oxford and Bristol based apprentices Lyell Perks and Tom Woolston who claimed the Gold and Silver prizes respectively at the same awards in the Student of the Year category, and Glasgow-based apprentice Gavin Kidd who was awarded third place at the IOR Scotland Apprentice of the Year Awards last year.

Andy Butler, Training Facilitator at Star Refrigeration added, “The future definitely looks bright for Sam. We’re thrilled about his achievements so far and look forward to seeing what he is capable of as a fully qualified engineer. We are striving to ensure that ours are the most highly sought after apprenticeships in the industry and our history of apprentices winning awards is testimony to its success.”

It was also a successful evening for long standing employee David Blackhurst, who was recognized for his significant contribution to the cooling industry for the past three decades. The former Managing Director of Star Technical Solutions took home the Fred Jamieson Award for industry Achievement.

Star Refrigeration and Star Technical Solutions celebrated last Wednesday at the awards dinner which was hosted by comedian Russell Kane.

To find out more about Sam Gills visit /apprenticeships/sam-gills.aspx