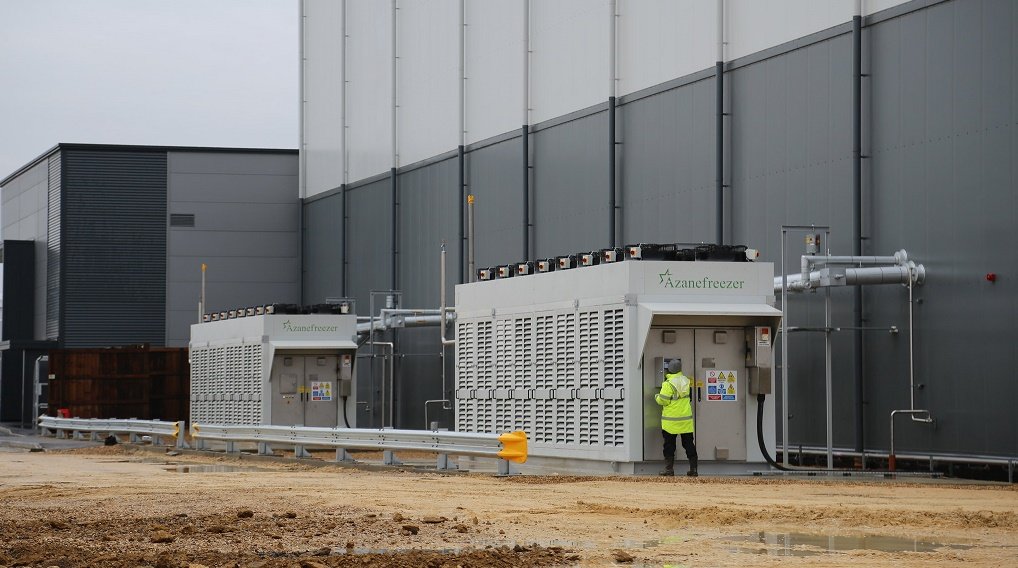 Star Refrigeration, the UK’s leading industrial refrigeration engineering company, has completed the manufacture and install of a new cold store facility for Lineage Logistics at their new site in Great Haddon, near Peterborough. This project consists of 15,000 pallet spaces of frozen warehouse capacity supporting Lineage’s plan for growth and the industry’s need for consolidation.

Lineage is the largest, most innovative temperature-controlled logistics provider in the world with over 1.4 billion cubic feet of storage capacity. They boast an infrastructure of 200 facilities in seven countries across North America, Europe and Asia.

The Peterborough development has seen the installation of a 75,000m3 cold store plant with a refrigeration capacity of 600kW. Results from recent energy performance data analysis for the site indicate that the Azanefreezer 2.0’s annual energy usage is one-third of that of UK’s ‘Best Practice’ guidelines, meaning Lineage is set to cut carbon emission by 453 tonnes of CO2 per year compared to the UK’s ‘Best Practice’ guidelines.

According to the specifications provided by refrigeration consultants Star Technical Solutions (STS), Lineage required a 600kW refrigeration system,which was designed to achieve a nominal storage design temperature of -24 degrees Celsius. Running costs were key to the plants design, with STS specifying a minimum condenser surface of 4,800 m2 to achieve optimum condensing pressures throughout the year. Evaporator absorbed power was also limited to 35kW, while the condenser absorbed power should be equal to or less than 30kW in order to maximise efficiency and reduce electrical costs.

Star Refrigeration were able to secure the contract through their offer of two independent AF300-S Azanefreezer ammonia refrigeration plants. In order to adhere to STS’s technical specification, Star modified its existing AF300 unit by retaining the existing low-pressure receiver and compressors, but upgrading the unit’s condenser and base frame to a larger size. This allowed it to achieve a higher efficiency than that required by the tender, thus reducing running costs.

The Azanefreezer solution delivered a number of different advantages, with the biggest draws concentrated in its efficiency, affordability and lower running costs. The use of a larger condenser allowed the facility to operate on 32.2kW for its evaporators -an 8.1% improvement on STS’s requirement-, and just 12.5kW for its condenser –a remarkable 58.3% improvement-. These improvements meant that running costs were significantly decreased over the whole life cycle of the freezers.

Capital costs were also minimised. The Azanefreezer is a modular, low charge packaged ammonia freezer with patented low pressure receiver design which is unique to Star Refrigeration. Its design allows for a reduction of the system’s ammonia refrigerant charge of up to 80% when compared to traditional pumped recirculation systems. Having all maintenance valves on the Azanefreezer unit as well as the use of reverse cycle defrost make possible the elimination of hot gas valve stations at each cooler, including all the associated ventilation and gas detection components. This is a significant benefit in terms of reducing the risk of refrigerant leakage and simplifying ongoing maintenance.

The Azanefreezer is assembled at Star’s manufacturing facilities and tested prior to dispatch which reduces onsite installation times and expenses. It does not require a plant room, either, eliminating third party costs by dispensing with the need for a significant amount of accompanying infrastructure.

Also, the plant was designed to have no flanged or mechanical joints within the cold store itself, meaning there are no potential leakage points inside the store. Instead, all valves and mechanical joints are positioned on the exterior of the unit and at heights which make them easily accessible from a maintenance perspective.

Star offered Lineage an affordable, robust industrial refrigeration solution that delivers high efficiency and meets all of the customer’s needs while exceeding expectations with regards to improved evaporator, condenser power and surface area (5,618m2 instead of the 4,800m2 specified, representing an improvement of 17%).

Jonathan Baker, Executive Director of Lineage Logistics in the UK said, “Star Refrigeration were able to respond to the most stringent requests for quality and efficiency and provided a solution that exceeded the technical requirements specified to satisfy the facility’s cooling need. We are impressed with the advantages offered by Star’s Azanefreezer and the smooth delivery of the project.”

The successful installation demonstrates Star Refrigeration’s ability to satisfy the most challenging of criteria and meet the demands of the largest company in the cold chain sector. The modifications made to the existing pre-engineered AF-300 Azanefreezer model is testament to the company’s ability to adapt and evolve according to customer’s requirements and highlights the versatility of the low charge ammonia refrigeration solution to fit a variety of projects of different sizes, including new builds and retrofits.

Star Refrigeration have a working relationship with Lineage which has spanned several decades, having undertaken both new-builds and extension projects for the company in the past.