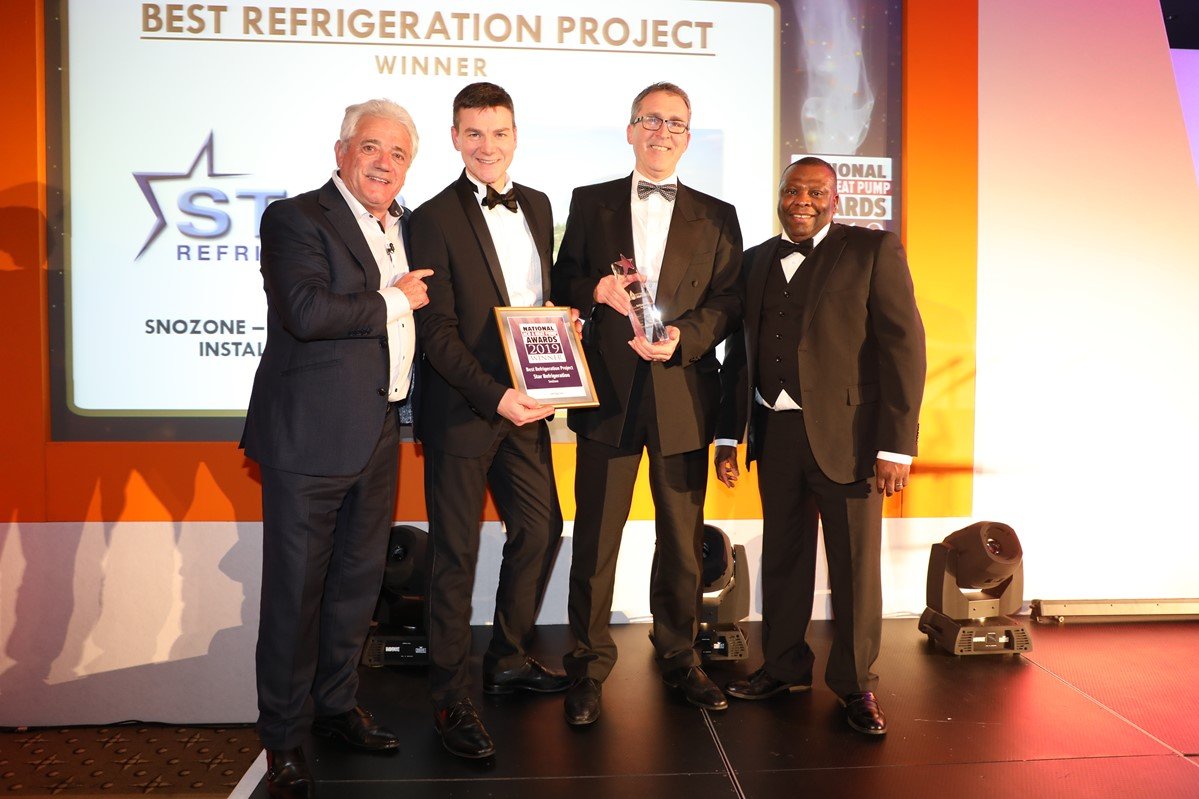 The National ACR and Heat Pump Awards is held annually and serves as an opportunity to celebrate innovation spanning the UK’s refrigeration and heat pump industry. Last night’s awards evening, held at the Midland Hotel in Manchester, saw Star’s work showcased three times, across different categories with a triple nomination for the ground breaking Azanechiller 2.0.

The ultra-efficient, low charge ammonia chiller has delivered incredible energy savings and reduced carbon emissions for the country’s top indoor leisure attraction, Snozone, in addition to future-proofing the business for the next 20 years. As the market’s first air cooled low charge ammonia chiller, it makes ammonia more accessible and offers the potential for huge energy reduction and lower running costs.

Snozone reported a 56% saving on energy usage in the first four months of the Azanechiller 2.0 in operation. The company also reduced its carbon footprint by 700 tonnes of CO2, and has improved green credentials by dropping HFCs for a natural refrigerant with zero global warming potential.

Alan Walkinshaw, Star Refrigeration’s Special Projects Sales Manager and responsible for the Snozone installation, said, “It’s an honour to accept this award on behalf of all of the Star team who worked incredibly hard on this project. Snozone was a great project with a heavy cooling demand and we were always confident that the Azanechiller 2.0 was the best solution. Ice and leisure is just one growing sector which can utilise the power of the Star Azanechiller 2.0”

Star worked closely with Hulley & Kirkwood to successfully deliver the upgrade project and achieve outstanding benefits including lower running and maintenance costs. Snozone’s Milton Keynes facility has 1500 tones of snow and ice which requires constant cooling at -4C to maintain optimum ski conditions. The air-cooled low charge ammonia chiller was able to maintain lower temperatures than the previous equipment whilst also delivering savings on electricity, thanks to its energy efficient design.

Suitable for cooling secondary fluids down to as low as -20°C, the Azanechiller 2.0 is designed to suit a range of applications including temperature control distribution, food production, HVAC, data centres, ice rinks and indoor ski slopes. The unique low charge ammonia chiller is designed to meet the specific market challenges of HFC refrigerant phaseout and lowering carbon emissions industry wide.

The Azanechiller 2.0 exceeds the EU Ecodesign requirements by between 74% and 146% depending on the application and operating temperature. This results in energy savings for customers and a reduction in environmental impact. Partnerships with large scale businesses such as Snozone and distribution company Gist have highlighted the many benefits of the low charge ammonia chiller.

The Azanechiller 2.0 is a plug and play industrial refrigeration solution designed and manufactured by Star Refrigeration in Glasgow.

For more information about the ACRHP Awards 2019 visit:

To find out more about the low charge ammonia Azanechiller 2.0 go to: