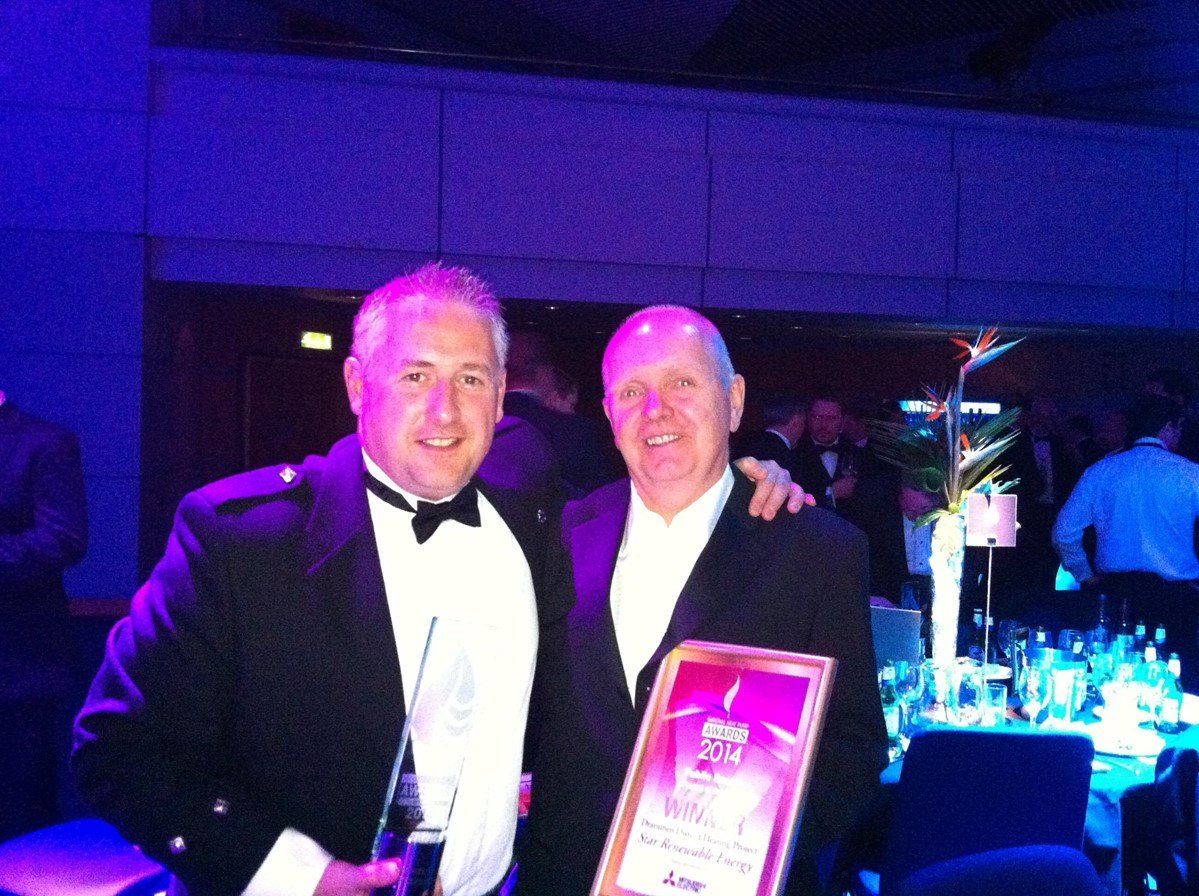 As part of the National Heat Pump Awards, the honour was bestowed in acknowledgment of the company’s groundbreaking development of the world’s largest zero carbon 90oC district heat pump, which made its debut appearance in Norway.

The nomination saw Star go up against the likes of industry giants such as Daikin, Mitsubishi and Danfoss, making the win a truly outstanding achievement.

The judges said: “Star have achieved temperatures previously thought impossible. This alone should bring heat pumps closer to the entire market, but in doing so with only ‘future proof’ natural working fluids is even more spectacular. As the Drammen project proves, any building in Britain can harness local heat and avoid burning gas.”

Dave Pearson, Director at Star Renewable Energy, says: “I am delighted to accept the award on behalf of the Star Renewable Energy team. The projects we have completed really demonstrate that heat pumps have now become environmentally and economically viable and should no longer be associated with smaller systems typically limited to 45oC. The technological advancements of the Neatpump in Drammen have revolutionised the way factories, hospitals, universities and houses can and should be heated. By harnessing local heat we can achieve a triple dividend of reduced environmental impact, reduced cost and an increase in local jobs.”

According to official statistics, heating accounts for approximately 50% of all energy consumed in UK, which equates to Britain’s annual £33 billion bill spent on heat alone, making it responsible for around a third of the UK’s greenhouse gas emissions. Industrial heat pumps have the capacity to harvest energy at a ratio of up to 4:1 or 5:1 vs ‘drive fuel consumed’ which represents colossal savings, both financially and environmentally.

Technological advances in heat pumps are bringing the UK closer to our carbon targets challenge as it reduces the need to burn fossil fuels, which is how 80% of our heat is produced today. Pearson said: “The advent of natural heat pumps that take warmth from natural water sources and deliver zero carbon heating will be remembered as a landmark event in the fight against not just climate change, but rising economic pressures of combusting fuel.”

With climate change gaining rapid momentum as one of society’s hottest topics, the time has never been more imminent to develop technology that eases the burden on the natural environment and helps preserve the earth for future generations.

The company’s investment in research and development was also rewarded with the influential Rittinger Medal by the International Energy Agency in Montreal last month. The British engineering team received the medal in recognition for their efforts in developing the breakthrough heat pump technology in Drammen that is large enough to warm 6000 homes, cut CO2 emissions by 14,050 tonnes a year and save UK households a huge £1500 on energy bills.

Star Renewable Energy is the recent business venture of Star Refrigeration, the UK’s largest independent industrial refrigeration engineering contractor. As a company renowned for its pioneering developments and boundary pushing approach, it comes as no surprise that Star Refrigeration is behind the revolutionary new natural fluid district heat pump technology.