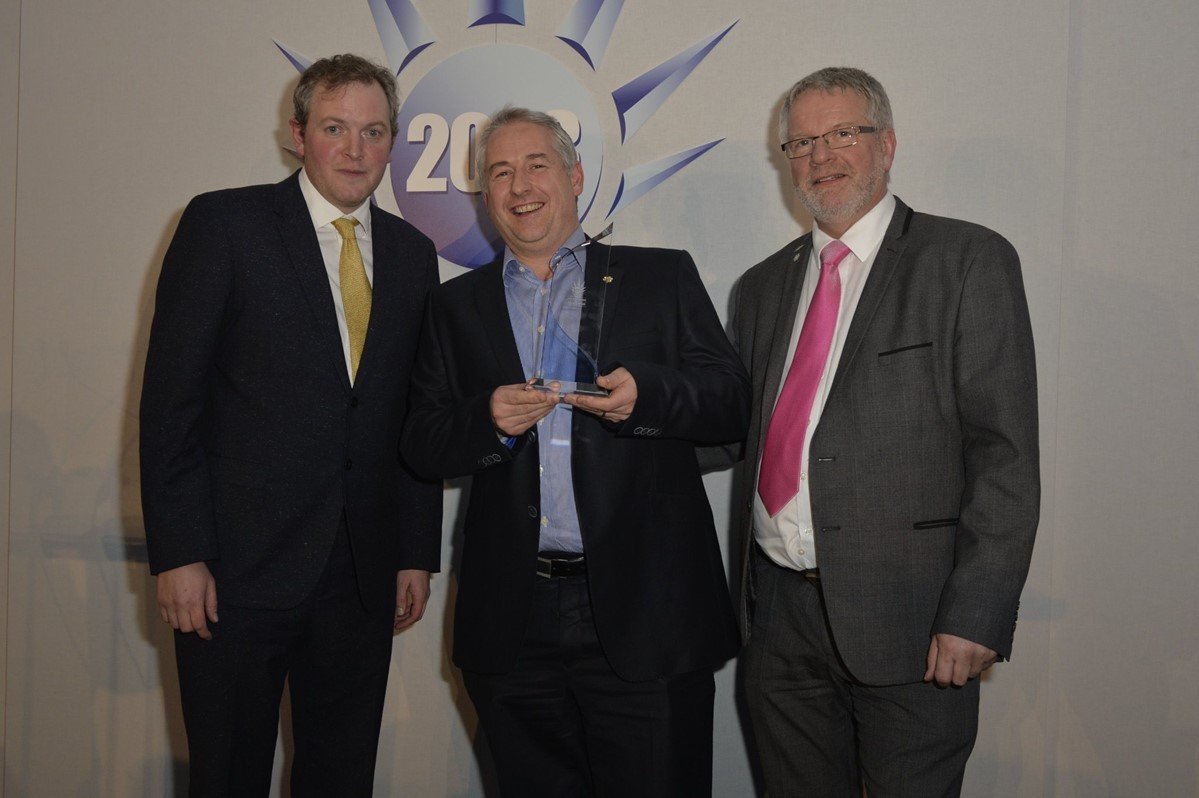 Dave Pearson, Director of Star Renewable Energy, has received the highly revered Alan Moor award presented by ACR News at an award ceremony last night. The award is presented every year in recognition of a significant contribution to the heating, air conditioning and refrigeration industry, in memory of the late managing director of Bitzer UK Alan Moor. The ACR News Awards 2018 took place at 155 Bishopsgate, London.

The 2018 Alan Moor award has been awarded to Dave Pearson, as decided by a panel of independent judges and the ACR news team. The judges unanimously decided that the 2018 award should be given to Mr Pearson for his dedication and advocacy on behalf of the industry. Over the last decade Dave has worked alongside industry, government and non-governmental organisations to highlight the essential role of heat pumps in tackling social injustice and climate change whilst bringing economic benefit to UK businesses.  The esteemed award recognises his achievements over a 22 year career in the vapour compression industry, in which he still continues to progress.

Currently he is working on the implementation of a 2.5MW Water Source Heatpump system to harvest heat from the river Clyde in Glasgow, to heat a range of residential blocks, offices and leisure centres via district heating. The project aims to reduce the area’s carbon footprint by over 50% and pave the way for a greener, gas free future.

The Glasgow based project will be the largest such system in the UK, and the largest since Star Renewable Energy (SRE) completed its flagship project in Drammen, Norway in 2010.

Director of SRE, David Pearson commented, “I am thrilled to receive the Alan Moor Award at the ACR News Awards 2018. It is a great honour to be recognised by industry peers. It is particular poignant for me as in 1991 I was warmly welcomed into the Bitzer factory in Sindlefingen Germany as a young student during the summer holidays.”

With a background in compressor manufacturing, gas compression, industrial refrigeration design, automated freezer manufacturing and refrigeration innovation, Dave has worked in the vapour compression industry for over two decades in various capacities, initially as a student. His undergraduate dissertation (1996), investigated blended refrigerants to replace R22. His master’s dissertation explored Innovation and New Product Development. He joined Star Refrigeration in 1999, after three years at compressor manufacturer Howden, and was Director of Innovation from 2008. Since 2013 he has led the SRE business unit to fully commercialise the most viable innovation identified, using the refrigeration cycle for cleaner, more efficient heating.

Long before taking up the role of Director of SRE in 2014, Dave had been involved in evolving the industry knowledge relating to the practical aspects of large industrial heatpumps. As part of a team that have secured projects to deliver nearly 30MW of heating, (over half at 90°C) the boundaries have been continuously shifting. Despite several projects for district heating including the world’s largest heat pump using ammonia as a working fluid, the technical challenges have not obscured the commercial demands of working in the energy sector.

Dave has a strong interest in promoting a wider understanding of the practical applications of heatpumps beyond the refrigeration industry, and also beyond other more familiar applications such as district and industrial process heating. He has spoken on many occasions at international events on the applications of heatpumps to provide combined district heating, cooling and desalination but is equally often speaking with future generations of undergrad students.

Dave commented, “We’ve listened to world leaders unequivocally express the need for cleaner, cheaper heat and strained to show how this can best be achieved with heat pumps. The penny seems to be dropping but we have to phase down the use of gas as well as support clean technologies.”

The ACR News Awards are designed to reward companies and individuals that demonstrate excellence and innovation in the industry. For more information about the awards ceremony visit: https://www.acrnewsawards.com/

To find out more about Star Renewable Energy and the company’s innovative heat pumps deployed worldwide, go to: https://www.neatpumps.com/