Future-Proof Refrigerants: What is the best option for small industrial refrigeration applications?

The Institute of Refrigeration published a paper which describes the refrigerant options available in the future. The phase down of HFCs in Europe under the F-gas regulation and worldwide through the Kigali Amendment to the Montreal Protocol means  it is time to start looking at refrigerant choices for the future. Businesses with small industrial cooling applications need to prepare for the imminent decline in HFC production and availability which undoubtedly translate in a continue rise in refrigerant costs as well as increase restrictions in its use accompanied by servicing bans. Looking at the future, long term refrigerant options must have zero or low Global Warming Potential (GWP) and have inherent high efficiencies.

There are a growing number of new fluids under development and being released by refrigerant manufacturers, including pure HFOs and multi-component blends. Many are at a testing phase and information on performance and pricing is limited.

There are also natural alternatives that have been used in the past and are back on the business agenda as component and system technology develops. These include ammonia (NH3) –the dominant choice in large applications-, carbon dioxide (CO2) -also known as R744- and hydrocarbons.

Let’s take a look at their suitability for small scale cooling applications along with other synthetic alternatives.

A good starting point when considering refrigerant selection is to consider what the perfect refrigerant would look like. The table below by McLinden and Diddion sets out the criteria:

Despite extensive research and development there is no single refrigerant that satisfies all these criteria and selection involves some level of compromise. 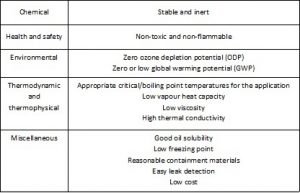 The introduction of flammability and toxicity as a necessary compromise in refrigerant selection brings a new challenge to equipment manufacturers and installers.

It can be seen from Table 3 that moving to lower GWP alternatives below 1000 typically results in a newly developed 2L classification. The letters A and B that preceded the flammability classification relate to toxicity. Although ISO817 recognises Class 2L refrigerants as ‘mildly flammable’ no such definition exists in the European ATEX directive, which describes what equipment and work environment is allowed in an environment with an explosive atmosphere. Under ATEX there are flammable and non-flammable fluids and 2L refrigerants come under the former. This means that they must conform with national regulations which are harmonised with the directive. In the United Kingdom this is the Dangerous Substances and Explosive Atmospheres Regulations (DSEAR) 2002 which requires a risk assessment to be carried out for all installations using flammable fluids. This will require education and training of the industry to ensure compliance, carrying out the required assessment and incorporating the necessary ventilation and gas detection. The majority of commercialised refrigerants are Class A including carbon dioxide and hydrocarbons. The notable exception is ammonia which has an OEL of 25ppm, limiting its use to industrial applications or in outdoor installations.

However, the focus of ISO817 is on the refrigerant but it is also worth considering the by-products of combustion, particularly as many of the new fluids coming to market are Class A2L. The products of combustion of ammonia are nitrogen and water, which are themselves harmless compared to the fluid itself. The opposite is true for a fluorinated refrigerant such as R32 where the products of combustion are hydrogen fluoride (HF) and carbonyl fluoride (COF2). These gases cause blindness, are highly toxic and present an immediate danger to life or health and must be taken into account when designing refrigeration systems so that in the event of an ignition (or fire), the correct emergency procedures are followed.

CO2 was one of the fluids used in early refrigeration but high operating pressures and transcritical operation in warmer ambient meant that it fell out of favour when lower pressure synthetic alternatives became available. Over the past 20 years, it has experienced a revival in use due to environmental pressures and new technological advances which have address previous issues.

Carbon dioxide is widely used in commercial and retail applications across the globe, which has driven down component and system pricing. It is also likely to play an increasing part in smaller industrial systems due to its low GWP, A1 classification and reduced installation costs. As the base fluid for GWP measurement, carbon dioxide is ideally placed to meet the requirements of refrigerant phase down.

A challenge to its use in small industrial refrigeration is longevity. At present, CO2 packages are built for the retail market and have a life expectancy based around the refresh cycle for a supermarket which is typically 10 years. Industrial end users typically look to invest in equipment with 20+ years life.

Experience with larger scale industrial systems indicates that increasing the life of a CO2 system to 20+ years is achievable but will require a more robust approach to the package design, manufacture and installation.

Ammonia boasts excellent operating efficiency over a wide range of operating conditions from -40 degree C freezers to +90 degree C heat pumps. This is a major factor in its success in industrial systems for over 100 years along with the longevity of installations. Ammonia remains the refrigerant of choice for large applications, despite its challenges of toxicity and flammability, in addition to high installation costs.

New developments in low charge packaged technology look to address safety concerns and increase the use of ammonia for small scale industrial applications. Ammonia charges can be reduced to less than 0.1kg/kW. Through value engineering the system design and the use of variable speed technology, efficiency can be improved by 67% and the use of aluminium coils can reduce refrigerant charge in low temperature evaporators by 95% when compared to stainless steel and pumped recirculation. Complete packages can be factory assembled, commissioned and shipped to site pre-charged. Once in position, site works are reduced to connecting the secondary pipework and power supply.

As a natural coolant which has been used for over 100 years, with a low and stable price, ammonia is likely to be used in small scale industrial applications in the near future.

Hydrocarbons have Class 3 flammability rating and have historically been limited to petrochemical applications. The development of low charge, multi-circuited hydrocarbon packaged chillers working with a secondary fluid has enabled refrigerants such as propane to be used for HVAC applications. Small charge water cooled packages have also been used for retail applications. The requirements of the ATEX regulation when using hydrocarbons is likely to limit its use to secondary applications and outdoor packages but it will have place, albeit minor, in the small industrial market where customers are averse to using a synthetic fluid and don’t want ammonia due to its toxicity or cost.

HFO’s are the “next generation” of man-made refrigerants and have been developed to have single digit global-warming potential. Both R1234yf and R1234ze(E) were developed as refrigerants to replace R134a. R1234yf is commonly used in the automotive industry and ze(E) is used for foam blowing and in packaged chillers and heat pumps.

The price of R1234yf of £100/kg to over £400/kg is likely to limit its use in industrial refrigeration to a component in several new refrigerant blends. R1234ze is more reasonably priced and is likely to be used for small industrial applications including packaged chillers and heat pumps.

The restricted number of suitable, single component low GWP synthetic refrigerant has resulted in the development of new multi-refrigerant blends to meet industry needs. These are made from mixtures of fluorinated hydrocarbons (HFCs) and hydrofluoro-olefins (HFOs), and consist of two or more components. Compositions vary based on application and are a balance of operating temperatures, pressures, efficiency, flammability and GWP. Those with GWPs lower than 500 typically have an A2L safety class. Major refrigerant manufacturers are developing their own branded solutions for different applications and are in the process of launching patented products.

With so many refrigerant blends coming onto the market, manufacturers are finding it hard to keep up with testing and performance. It is too early to say which fluids are the most efficient, and they are likely to be expensive.

Over the past 20 years R32 has played an important role as a component in refrigerant blends including the R407 (R32/R125/R134a) series and R410A (R32/R125). R32 has more recently been used as a pure refrigerant for air conditioning and heat pump applications in Japan, where it has replaced R410A.

The need to reduce refrigerant GWPs under the F-gas regulation in Europe has resulted in a number of manufacturers launching R32 air conditioning equipment in 2016. More are expected to follow in 2017.

There is no single fluid that fulfils all requirements and is the ‘perfect choice’ for the refrigerant of the future. There will always need to be some sort of compromise, whether it’s a higher price to pay, the need to replace equipment more often or the risk of toxicity and flammability.

New synthetic refrigerants will permit the use of existing component technology and are likely to be used in condensing unit and smaller distributed systems. Their classification as A2L fluids under ISO817 will require consideration of flammability and the need for addition ventilation and gas detection. Temperature glide must also be considered for blends but innovation in heat exchanger design could provide attractive energy savings.

Carbon dioxide is likely to play an increasing part in smaller systems due to its low GWP, A1 classification and reducing installation costs. Food processors and process cooling customers may find the opportunity for high grade heat recovery attractive and seasonal efficiencies should be attractive in the UK’s temperate climate.

There are likely to be more opportunities for package ammonia solutions as innovation drives down the cost of equipment and installation. Reduction of refrigerant charge will also attract end users who have previously been concerned over flammability and toxicity.

Both cheaper natural refrigerants and more costly synthetic refrigerants pose risks in terms of flammability and can be dangerous if not handled correctly.

Reassuringly, some natural refrigerants are heavily regulated to ensure their safety. Such is the case of ammonia, which counts with a significant number of specified procedures and HSE compliant practices for its design and installation. These are in place to minimised H&S concerns and any other associated risks if carried correctly by certified refrigeration experts. Many of the new synthetic refrigerants will also need to comply with these safety measures. Future-Proof Refrigerants: What is the best option for small industrial refrigeration applications?