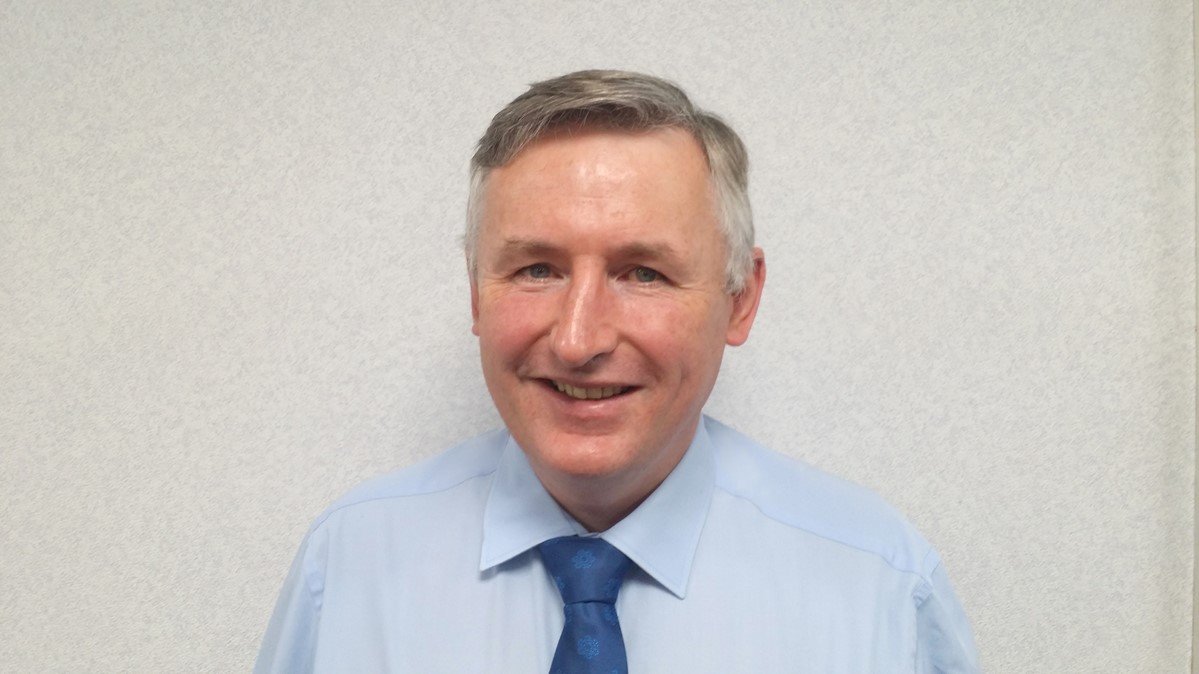 How to measure the energy performance of a cold or chill store: using Specific Energy Performance as an efficiency measure enables operators to benchmark energy improvements (kWh/m3/yr)

Over the last 25 years, various studies of energy performance have concluded that the operation of a low-temperature, industrial-size cold store facility (about 100,000 m3) requires approximately 30kWh per cubic metre per year (30kWh/m3/yr). Up until September 2019 when new research entitled ‘Energy performance of industrial cold storage facilities’ was presented to The International Institute of Refrigeration, the most recent guidelines on best practice in the United Kingdom dated from 1994, making them outdated and unreliable.

However, the newly published research on cold store energy performance provides a more accurate best practice benchmark as it incorporates data supplied from analysis of a number of contemporary cold and chill stores using a range of energy-saving techniques.

The new curve for best practice performance assumes an energy use level in large facilities which is about 15% to 30% of the generally accepted figure from two decades ago. Furthermore, the research specifies that Specific Energy Consumption (SEC), which is calculated by kWh/m3/yr, is an important benchmark for refrigeration system performance because cold stores cover a wide range of sizes and applications and the key to improvement is to enable operators to compare against benchmarks for their system.

According to the research findings, a modern and well maintained cold store of 100,000 m3 should have a specific energy consumption (SEC) of 10 kWh/m3/yr for the refrigeration system while for a 500,000 m3 store the SEC could be less than 5kWh/m3/yr.

How important is to measure refrigeration energy performance in cold stores

It is generally acknowledged that the refrigeration plant is responsible for about 70% of the total site energy use and therefore the efficiency of a refrigeration system has a direct effect on the environmental and financial performance of a temperature controlled store.

With the recent hikes in energy costs of up to 30% and the stringent targets put in place to mitigate the effects of climate change, the demand for energy efficiency in the cold chain is unprecedented. Despite the growth in variety of monitoring and control technologies to manage electrical usage, these measures do not seem to have been effective in reducing consumption. Factors contributing to this disappointing performance include the absence of a clear definition of the term cold store efficiency, the difficulty of ascertaining the cost of plant operation, the detrimental effects of inclement weather and the inadequacy of fail-safes put in place to prevent them, the condition of building infrastructure and the equipment contained within and the inefficiency of process management.

However, the energy efficiency of cold and chill storage facilities can be significantly improved.
In order to overcome these issues and optimise the efficiency of a cold store, operators should settle upon a consistent definition of ‘cold store efficiency’ such as product movement per kWh or per energy cost –if the total cost of operation and service charges are not available – and improve the means of monitoring it.

Additional efficiency measures should be aimed at reducing moisture ingress and sunlight heat, such as ensuring all joins and apertures are made as close fitting as possible and using reflective outer surfaces to deflect the strongest rays of the sun away from the buildings. Other measures should include undertaking proper and regular maintenance of the plant’s machinery and its surrounding infrastructure, as well as conducting a full audit to identify areas for improvement. Some mitigating factors could include cost avoidance schemes that link cold store energy use to grid supply in order to alleviate power consumption or the use of solar panels.

In 1994, the Energy Technology Support Unit (ETSU) identified a best practice benchmark of 30kWh/m3/yr for larger stores of more than 100,000m3  in size. Meanwhile, a similar study the following year from Bosma in the Netherlands used a far larger range of between 34 kWh and 120 kWh/m3/yr and their findings were corroborated by a 2002 study on behalf of the International Institute of Refrigeration. A more recent pan-European project named ‘Improving Cold-Store Equipment in Europe’ (ICE-E) assimilated information from over 800 sites in 2013 – See Fig1.

A common shortcoming is that the studies do not disclose whether the sites in question achieved its primary goal of maintaining the space at the desire temperature. While the authors of the studies appear to have assumed that this objective was always achieved, practical experience of conducting onsite audits would suggest otherwise. Understanding this point is the key to obtaining a better view of how a plant may improve its energy efficiency, since raising its temperature setpoint is one of the best methods of doing so. However, this can only be done if the plant is already reaching the target temperature.

Furthermore, the sites assessed in the ETSU guidance appear to have been smaller in size than those in operation today, given that the largest store referenced in that study was just under 250,000m3. This compromises the reliability of the guidance, particularly for larger facilities, and means it may not be accurate in a modern context, especially when recent innovations in improving energy efficiency in plant operation are taken into account.

The recently published research (Pearson, A. 2019), which establish the New Energy Performance ‘Best Practice’ Guidelines for cold store refrigeration facilities incorporates data obtained from modern cold store facilities and compare this to the previous findings in order to pinpoint a best practice benchmark that is more relevant to the current industry practice. This will not only give cold store operators a target to aim for, but can suggest possible means of doing so.

By assessing actual energy usage at 21 sites it was possible to gain a more immediate view of the issue and develop a more current benchmark.

Following are some examples of what has been proven on specific sites. The analysis revealed that a pumped ammonia site with a volume of approximately 380,000m3 had a specific energy consumption (SEC) of around 10kWh/m3/y, while another ammonia-carbon dioxide cascade system of around 275,000m3 in size had a similar SEC. A modern low-charge ammonia system of 81,000m3 in volume incurred a SEC of 12kWh/m3/y, while a secondary refrigerant system in a site which use glycol as a complementary refrigerant to ammonia (between 145,000m3 and 225,000m3 in volume) had a SEC of approximately 19.5kWh/m3/y.

The sites chosen in the recent analysis are all considered to be good examples of cold stores employing best practices with regard to energy efficiency, with the exception of the secondary refrigerant system, which loses efficiency due to its employment of glycol pump power and a defrost system. It should be noted that energy usage it is also affected by the facility’s throughput – a site’s energy consumption where product movement rates are high will result in a larger volume of air ingress due to more frequent door operation. Likewise, cold stores receiving product above store temperature will use further energy to remove heat from the product. Both scenarios will result in additional energy consumption.

Extrapolating all the data obtained from these 21 sites and mapping it onto the formula devised by the 2013 pan-European study allowed us to arrive at a current best practice benchmark of around 15% to 30% of the figure that was recommended 25 years ago. This underlines the fact that the 1994 guidelines are increasingly obsolete and require an update to make them viable for a modern generation of cold store facilities.

In concrete terms, the analysis showed that a cold store with a volume of 500,000m3 should be aiming for an SEC of under 5kWh/m3/a. However, in a smaller location of just 50,000m3 in volume, that figure could rise to as much as 16kWh/m3/a and still be considered to be achieving its best practice benchmark. For that reason, including the volume of the store in the measurement of its energy efficiency is crucial to achieving a balanced outlook on how well it is performing. In order to obtain a comprehensive overview of its performance and pinpoint areas which could benefit from improvements, it is necessary to install individual power meters for each self-contained module of the plant, while electrical usage figures should be aggregated on a daily basis. Following these measures will allow cold store operators to gain a clearer picture of their energy performance and how they can improve it.

Star Refrigeration has launched a benchmarking tool to assess how businesses’ electricity usage compares against similar sites across the UK and Europe. If you are interesting in knowing if you’re paying more than average on your annual energy bill, please contact Star Refrigeration. You will receive a confidential report demonstrating how your energy consumption compares to similar size chill/cold stores – see Fig 3 below. 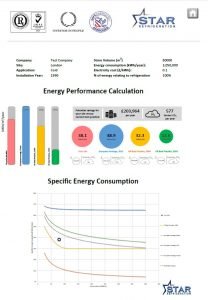 The free benchmarking service is part of a wider Star strategy to increase awareness of energy consumption within the temperature controlled storage and distribution industry, with the end goal of reducing carbon emissions and energy costs.