Scottish salmon processor keeping it cool with Azanefreezer for R22 phase out project.

Pinneys of Scotland, part of the Youngs Seafood Group, is a leading processor of Scottish smoked salmon and are based at Annan, Dumfriesshire. Cooling is a key requirement for their production processes and the majority of the factory was installed using systems operating with R22 refrigerant. Under the Montreal Protocol and subsequent European and UK legislation, the phasing out of R22 comes to a conclusion at the end of 2014 and so Pinneys needed to develop a strategy to meet this deadline.

Pinneys asked their existing maintenance provider, Star Refrigeration for support with their phase out strategy. This involved looking at a variety of high, medium and low temperature cooling requirements on site currently running on R22 and assessing an appropriate alternative solution. Key requirements were to keep the facility operational during the changeover from R22, provide  a solution that offered long term cooling security for the site and to deliver a solution that balanced efficiency and capital cost.

A number of options were considered including retrofitting systems with alternative gases, installing new HFC refrigeration systems and switching to natural refrigerants.

A critical part of the R22 strategy was conversion of the factory’s cold store where frozen product is stored at -25°C before further processing.  This chamber was cooled by two existing R22 refrigeration plants housed in different plant rooms. Both plants were assessed for possible gas conversion but due to their age, condition and the need to retain the cold store operation during any conversion works, this was ruled out. A decision was therefore made to look at new equipment.

One of the R22 plant rooms had been earmarked as the location for a new ammonia/glycol refrigeration plant which would serve other areas of the factory and the other was ruled out due to access issues. This meant that any new equipment would need to be located elsewhere. Pinneys were keen to avoid the added cost of building a new plant room and so packaged equipment with its own enclosure was preferred.

Options for refrigeration plant using synthetic refrigerants such as R404A and R407F were considered but Pinneys were concerned about the long term availability of these refrigerants following news of the phase down programme detailed in the European f-gas regulation earlier in 2014. A decision was made to look at natural refrigerant alternatives.

Star proposed their Azanefreezer system, an air-cooled, ammonia refrigeration system for cold storage applications.  Its packaged design avoids the need for a plant room and it can be located at ground or roof level on either a concrete plinth or steel frame. Azanefreezer’s combination of ammonia refrigerant, Star low pressure receive technology, EC fan and PLC control technology delivers efficiencies 15% to 20% higher than traditional HFC technology and with a refrigerant charge that is 80% less than pumped circulation ammonia.

Two pipes between the Azanefreezer package and cold store evaporators keeps site installation time to a minimum. All equipment requiring regular inspection is located within the package, simplifying maintenance and eliminates the need for roof void valve stations.

Alex Henderson, Key Account Manager at Star Refrigeration said, “As a long standing maintenance customer, we have been working with Pinneys for a number of years. The latest project involved the development of a long term refrigeration solution for the Coldstore plant as well as the rest of the site. It has reduced the amount of refrigeration equipment and helped improve both operating temperatures and efficiency.

Using our packaged Azanefreezer concept avoided the need for a new plant room and we were able to position and commission the new coldstore plant before decommissioning the existing equipment.”

Gary Parker, Pinneys Engineering Manager, said “Star Refrigeration have a long history of installing and maintaining plants both at Pinneys and also across the wider Young’s Seafood group.

This is our first ammonia system at Annan and Azanefreezer’s low ammonia charge was a big reason for selecting it over more conventional ammonia solutions. Since its installation, our cold store temperatures have noticeably improved.” 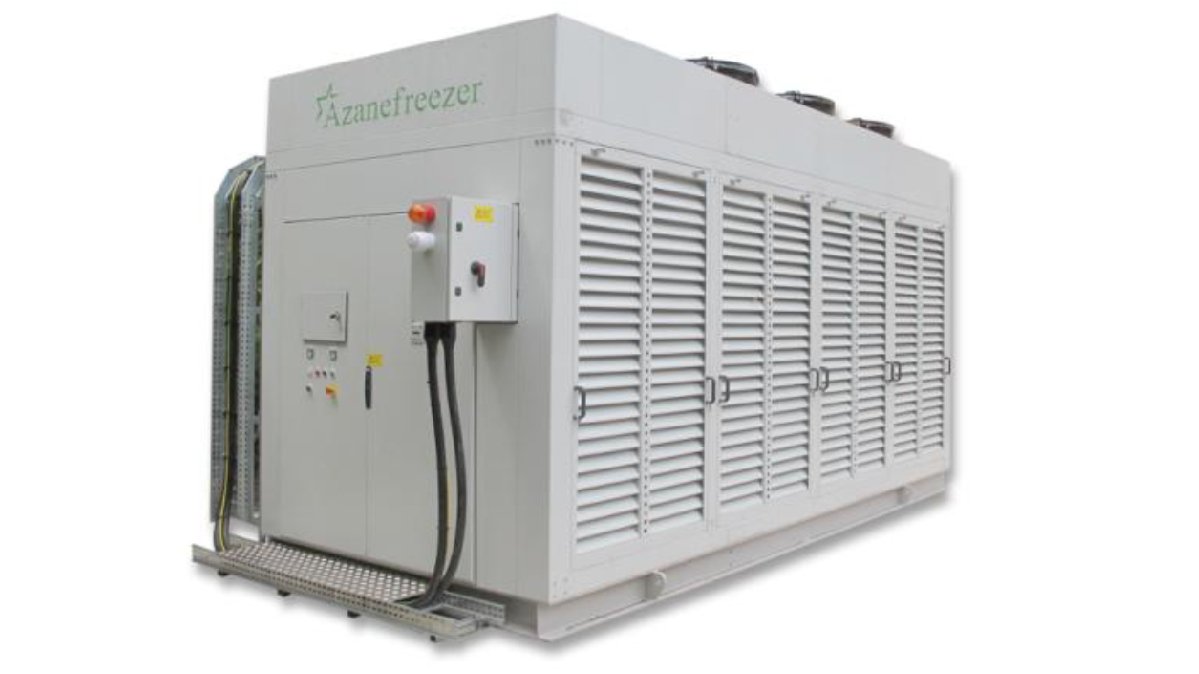