2003 in the UK was the hottest year on record, with a summer that saw the recorded temperature exceed 38°C for the first time. In two parts of the UK things were not so much hotting up as cooling down, as two significant refrigeration projects were underway.

They were two new Central Distribution Centres (CDCs), being built for ASDA in Falkirk and Skelmersdale. The projects were significant for a variety of reasons, including: their physical size, the timescales to build them, the commercial arrangements agreed and the technical innovation involved.

In terms of size, they are among the biggest temperature controlled buildings in the UK, with a total combined internal volume of 412,000m3. That’s enough space to swallow over 5,000 double decker buses!

Despite their size the installations were built at a breathtaking pace, with the overall programme at Skelmersdale being just 30 weeks, from cutting turf to passing product through the installation. One of the main reasons these impressive statistics areachievable is the enlightened “partnering” approach that ASDA has adopted for running these large, multi-discipline projects. The project team, including all the key sub-contractors, is formed at the initial stages of the project. The team then works to deliver exactly what ASDA require, with the specialists inputting effectively to the project at the concept stage. Open book tendering is used to develop costs, with all aspects, including overhead recoveries and profit, being agreed ahead of the price being finalised. ASDA and Star have worked in this way for several years, with similar projects completed in Wakefield and Bedford.

And what was technically innovative about the installations? They both utilise the natural refrigerants carbon dioxide (CO2) and ammonia (NH3). Each site has a cold store and a series of large chill rooms,operating just above 0°C.  The refrigeration plant for the  -25°C cold store operates as a cascade system, with CO2 being used as the low temperature fluid in a standard vapour compression cycle, rejecting its heat to the NH3 system. CO2 is then used as a volatile secondary refrigerant for the chill areas, being pumped out at –5°C, the condensing temperature for the cold store circuit, and returning as a vapour at the same condition, for condensing by the NH3 system.

The CO2 systems utilise components suitable for operation at the higher pressures required for this fluid. The high pressure side of the CO2 circuit is rated for 51 bar(g), while its low pressure side is rated for 40 bar(g). Oil injected screw compressors, packaged by Star, are used for the low temperature CO2 circuit; along side a highly efficient oil retention and recovery system, operating a 3-stage separation process. Their swept volume is a 10th of what would have been required if ammonia had been used as the low temperature refrigerant. Plate & Shell heat exchangers are used for the CO2 condensers, delivering a compact, efficient and reliable package. The air coolers used in both the cold and chill stores are designed with circuiting that had been optimised for use with CO2, delivering higher performance than comparable coolers using either HFC or NH3 refrigerants.

The defrost system (figure below) is patented by Star Refrigeration, and involves taking liquid CO2, at the -5°C saturated condition and pumping it up to approximately +9°C saturated, the defrosting temperature, via positive displacement pumps. The liquid is then boiled off, using waste heat from the compressor glycol oil cooling system and given around 10°C of superheat, to ensure there is no condensing of the CO2 in the vapour lines to the heat exchangers. The “hot” gas is then deliveredto the air coolers, via individual valve stations.

The energy efficiency of the new CDC’s is substantially better than had been achieved on previous sites, even though they were already achieving “best practice” performance.

In addition, it has been possible to eliminate ammonia from the refrigerated chambers without using a large charge of fluorocarbon (greenhouse warming gas). The total charge of ammonia in the system is 1,000kg, whereas an ammonia glycol system would have required about 1,500kg and a direct ammonia pumped system charge would have been about 15,000kg.

Further environmental benefits have also been achieved. The previous standard system would have used four evaporative condensers, with associated chemical water treatment, but for this system the whole plant heat rejection is achieved with two condensers, so the water treatment is simpler and cheaper.

Alongside these benefits, the use of CO2 for both the cold and chill stores has allowed much smaller pipework to be used for distribution of CO2 to the air coolers. With the reduced weight of pipework and associated services to be supported in the roof void it has been possible to simplify the steelwork, resulting in savings in steel capital cost and site programme.

The overall cooling capacity of the two installations is 7MW, and they are the first of their kind in the UK. Their completion means that Star has applied CO2 as a refrigerant across a range of temperatures and applications from -54°C to +10°C; for low temperature freezing, cold storage, chill applications, air-conditioning and hot gas defrosting. 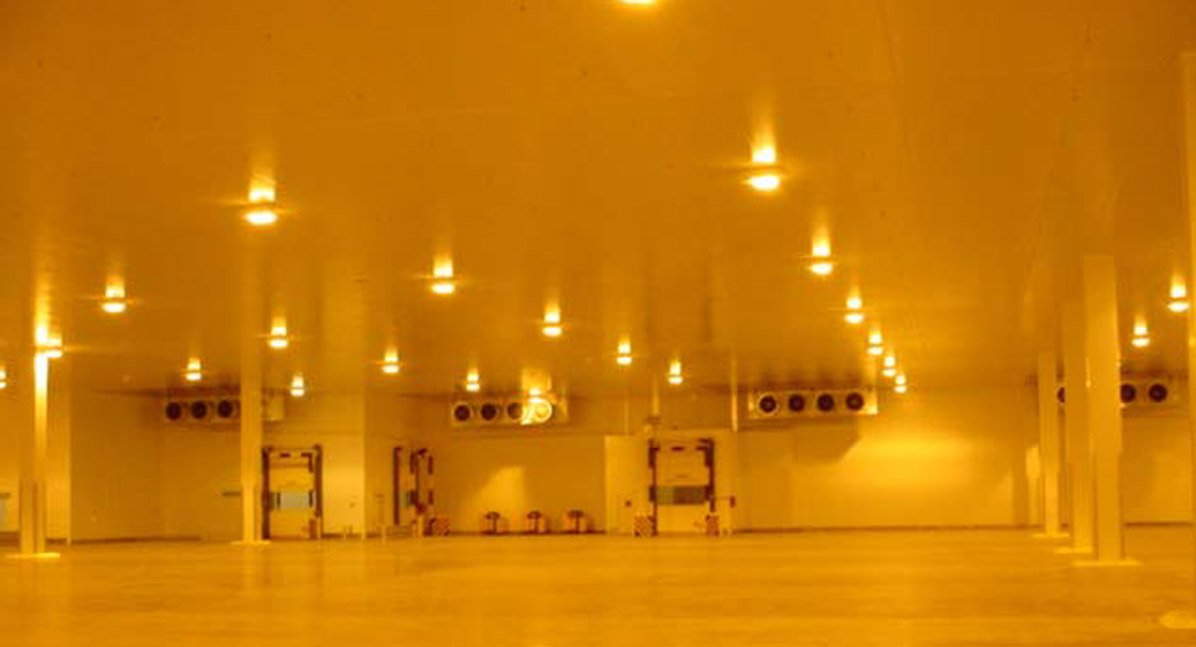