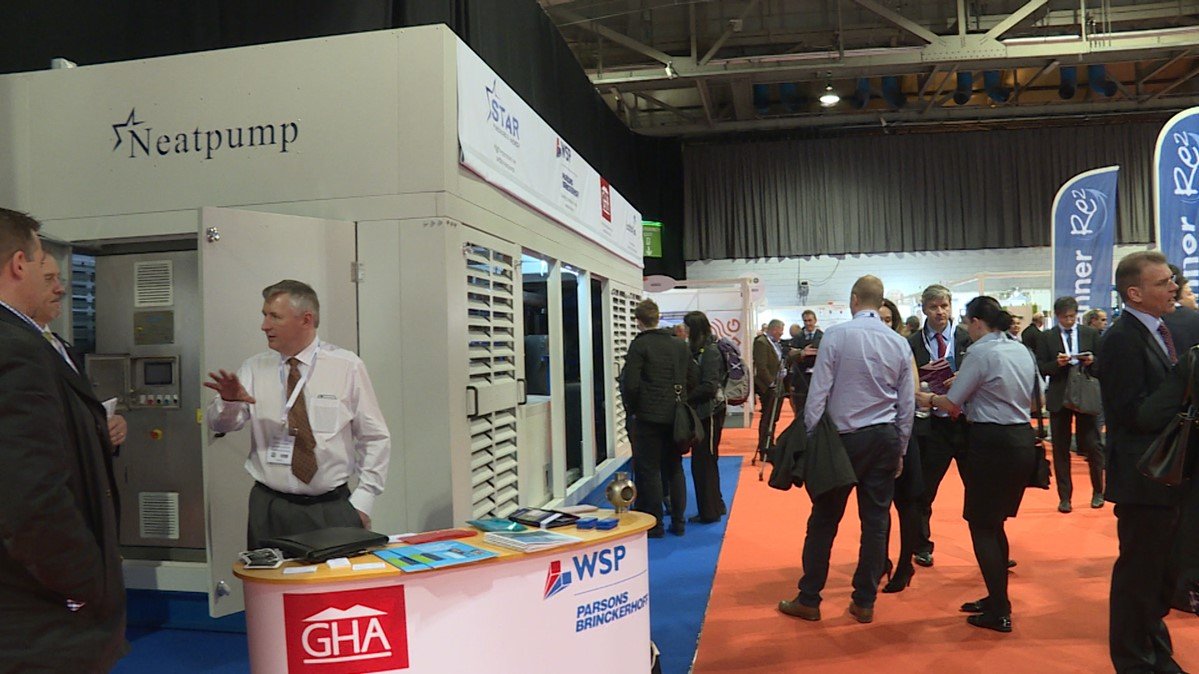 Large heatpumps are expected to play a key role in meeting government heating decarbonisation targets, according to partners involved in the development of the UK’s largest air source heatpump for residential use.

An industrial-size air source heatpump capable of delivering affordable, low carbon heating and hot water for vulnerable households across Scotland was said to be a new concept of district heating at the UK’s largest renewable energy conference and exhibition, All-Energy.

“Heatpumps were not considered at the start of this project as we had never thought it would be possible to work with heatpumps on this scale. However, by working with our partners, we are able to produce a state-of-the-art solution which will deliver real benefits for our tenants. GHA has only worked with small, individual heatpumps which we found to be unsuccessful. However, this is a different beast.”

The 400kW air source heatpump will be the main energy centre and connected to a district heating network which will deliver low carbon heating and hot water to seven high-rise blocks. At eight metres long and weighing 10 tonnes, the air source heatpump incorporates in-built control systems to enable remote monitoring and ensure optimum efficiency throughout its life-cycle, which is designed to exceed 20 years.

With the use of highly durable industrial components, water temperatures of 60°C are achieved, allowing for standardised radiators to be used.

Air source heatpumps are suited to the UK’s mild climate as warmth is extracted from the outside air and then boosted for distribution. The properties will then be connected via heat interface units to a wet central heating system and thermostatically controlled showers without the need for bulky cylinders. This will be the first air source heatpump installation in Britain to provide central renewable heating for residential high-rise buildings.

Dave Pearson, Director of Glasgow-based Star Renewable Energy, said: “Many people believe that renewable energy is solely for modern buildings. However our newly developed product demonstrates this is most certainly not the case.”

“If the government’s ambitious targets for a complete cessation in the use of fossil fuels for heating are to be realised, we need sustainable and lower cost central community heatpumps capable of retrofit without the constraints and high infrastructure costs associated with other renewable technologies.”

Ewan Jures, Principal Engineer at WSP Parsons Brinckerhoff, gave details of the different options and factors affecting deployment of other low carbon technologies in the GHA project, adding that they could not be deployed as “cost-effectively and as rapidly” as the community air source heatpump.

He said: “Within the context of the GHA development we assessed, biomass suffers from issues of access for deliveries, air quality concerns and potential flue stack height. Combined heat and power was difficult due to a locally constrained gas grid and currently has low electricity export prices. Ground source heatpumps were not an option as there was a lack of available and suitable grounding in the area, while water source heatpumps were not suitable as there was no nearby body of water.”

Jack Welsh, Scottish Gas Technical Sales Manager – Heat Networks, added: “The modular unit is self-contained, and can be delivered to site as a plug and play product, allowing the technology to be fully controllable and easier to maintain.

“It is great to have another Scottish company involved to help deliver sustainable, low-cost heating, with full support provided on an ongoing basis to ensure customers have full confidence in its reliability and high efficiency. The technology has a good role to play as a source of renewable, affordable heating within an urban setting and it contributes to a clean air environment in any area where it is deployed.”

Scottish Gas has an active programme to engage local housing associations in developing renewable district heating projects and according to Welsh, they are “looking forward to developing similar projects in the near future.”

With Scotland’s target set for removal of all carbon from heating systems by 2050, the support for the take-up of heatpump technology is growing with a view to decarbonising the grid further, which will continue to improve the performance of the heatpump and bring carbon emissions down.

To decarbonise the heat sector, new technologies need to be developed and deployed on a “large-scale” basis and integrated into the “wider energy system”, Scottish Renewables said.

The air source heatpump was exhibited at All-Energy during the 4-5 May event –  a highlight in the renewable industry calendar. Attracting representatives from a host of renewable sectors, including onshore and offshore wind, bioenergy, wave and tidal, sustainable cities and energy efficiency, the exhibition provided attendees with the opportunity to learn more about the innovative new developments in the industry.