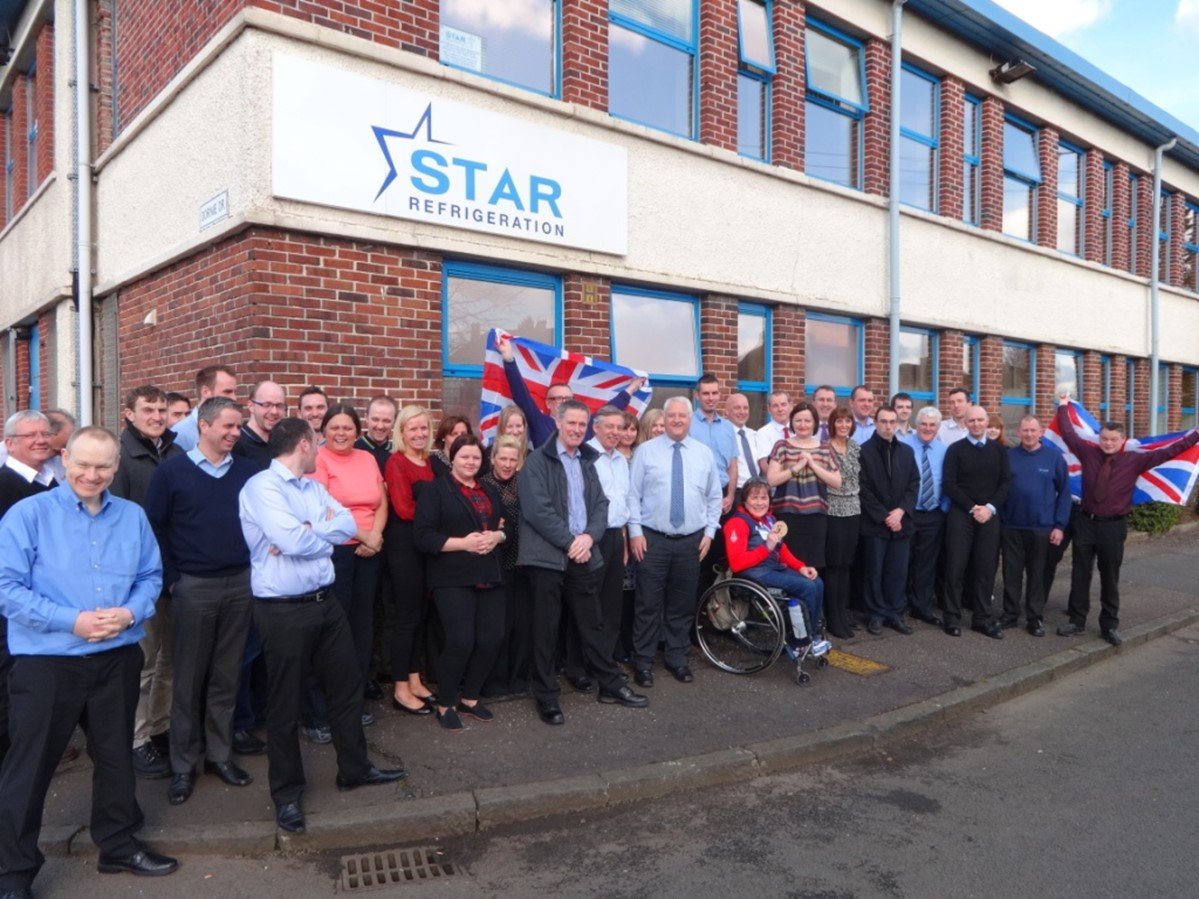 The only female skip at an international level visited Star Refrigeration to tell staff about how she led her team to victory and won the Bronze medal for Britain. British champion and local hero Aileen Neilson received a hero’s welcome at Star Refrigeration from over a hundred staff upon her arrival at a branch in her native Glasgow. Citing words from a keyring on the handbag that she says she always carries with her, the Paralympic Wheelchair Curling champion encouraged people to follow her life philosophy: “Wish it – dream about it – do it! I wished to represent my country, I dreamt about it and now I have done it!” Aileen inspired a standing ovation and loud cheers amongst company employees when she was congratulated by Sales director Alan Walkinshaw with flowers and champagne. Staff at Star had the chance to admire her Bronze medal and be motivated by her general approach to life and winning attitude: “If anyone set himself a goal and wants to do something really badly, if you put in the time and the dedication and have the right people around you, anything is possible,” she said. “Particularly for people who find themselves with a disability and sometimes think that that’s their life over, I can truly say that being in a wheelchair has actually given me so many more opportunities and a chance to travel all over the world through sport and meet loads of fantastic people.” She thanked everyone for their continuous support and encouraged them to take up the sport by offering a curling training session for members of staff, if they were up for the challenge. Astrid Prado, Marketing Manager at Star Refrigeration, said: “I felt inspired to try out curling by her strength and courageous message to dare fight for what you want – and let’s face it, it is not every day that an Olympic champion invites you for a game!” Commenting on her journey to Sochi, Aileen said: “The Paralympic Games in Sochi 2014 was a rollercoaster ride – highs, lows and finally triumph – a Bronze medal. I have been overwhelmed by the support before, during and after the Games from family, friends and complete strangers. It is only through the belief and support from many organisations and companies such as Star Refrigeration that has enabled us to realise our dream.” Aileen thanked Star Refrigeration for supporting wheelchair curling by sponsoring the Scottish Wheelchair Pairs Curling Championships at Braehead for almost a decade. The games take place at Braehead’s eight sheet curling rink every year and Aileen has competed several times, taking home the top prize with partner Jim Taylor at the 2008 championships. Alan Walkinshaw, who regularly attends the championships, has expressed his pride for Aileen and Team GB’s triumph: “As you can expect, we were all rooting for Team GB in the Paralympics curling, and I couldn’t be happier to see them return to Scotland with bronze medals. Aileen possesses an immense talent for her chosen sport and it’s no surprise that she has led the team to victory!” “We are privileged to have her visit Star. Everyone was very excited and inspired.” “She has demonstrated that she is a superb athlete and a courageous person with a can-do spirit.” See Aileen’s full interview at https://www.youtube.com/watch?v=Ra1gSNy1MAg. Pictures available at https://www.flickr.com/photos/122102864@N07/.
Sochi Bronze medallist Aileen Neilson reveals her personal motto